This is the first of a many part series covering minor leagues.  Focus will be for players on Chicago Cubs and Chicago White Sox.  Baseball Prospectus has a more concise run down on top prospects.  I thought of cross reference data with theirs but that would have to be done manually as this data model gets no data from that site nor does it have code to process it

This series will look at these minors through the lens of this data model only — the exact same model used for MLB players.  In the future it’s possible, and may be necessary, to incorporate more minor league data into this model.  Currently only one minor league snapshot is taken per year and this is it.

It has been a year since we last looked into minor leagues.  I have been reticent about applying this data model to minor leagues because their focus is player development.  The purpose of this model is to assign value to players based upon run production.  Minor league players typically move from league to league making their value more nebulous.  There are probably much better models using advanced play by play metrics that can better determine which players have a chance in MLB.

A player who excels in the minors has no guarantee of surviving the brutality of MLB talent.  Great players, however, should rise to the top of every league but great players are relatively rare.  The vast majority of MLB resides in the muddy middle of talent.  That talent or lack thereof is what either propels a team into the playoffs or relegates them to watching it  on TV like the rest of us.

This model has a specific purpose of accurately reflecting past value — something sorely lacking in modern baseball statistics.   A franchise that has minor league teams that are terrible probably need to look into why and probably have a dearth of talent waiting in the wings for next season. This could be a problem as we saw last season with the dismal season the White Sox were having with all their minor league affiliates.  White Sox were sellers at the trade deadline so we should see some improvement in all their teams.  Not sure what the Cubs have been doing with minor league acquisitions but these next bunch of reports will take a look see into their farm system which may forecast what we should expect in upcoming seasons.

AA has three different divisions, Eastern, Texas, and Southern containing affiliates who  represent all 30 current MLB franchises.   Like this model does with MLB, all divisions in all minor league classes gets lumped together and all players get ranked together.  More info on these minor leagues can be read here , an article written almost 5 years ago now.

The purpose of this data model is to simplify a player down to rank/value (WAA).  If you want to look at tables upon tables of numbers, baseball-reference.com has an excellent informative and easy to navigate site.    This series of articles represents a snapshot for commentary.

So, without further adieu, let’s get started with the Tennessee Smokies, the only  team I follow on Twitter.

Below are team statuses from the most recent snapshot and the last snapshot taken last season for Cubs AA affiliate.

Update 10/22/2018:  This was the first minor league report and it turns out the CHN AAA file got mistakenly replaced its AA file.  CHN is the only team affected.  I was using it for testing and something got screwed up.  The 2018 numbers for CHN are wrong but all the other teams are correct.  See Part 4 for more clarification.

They do, however have a fun promotion department.  Here’s one their baseball promotions. 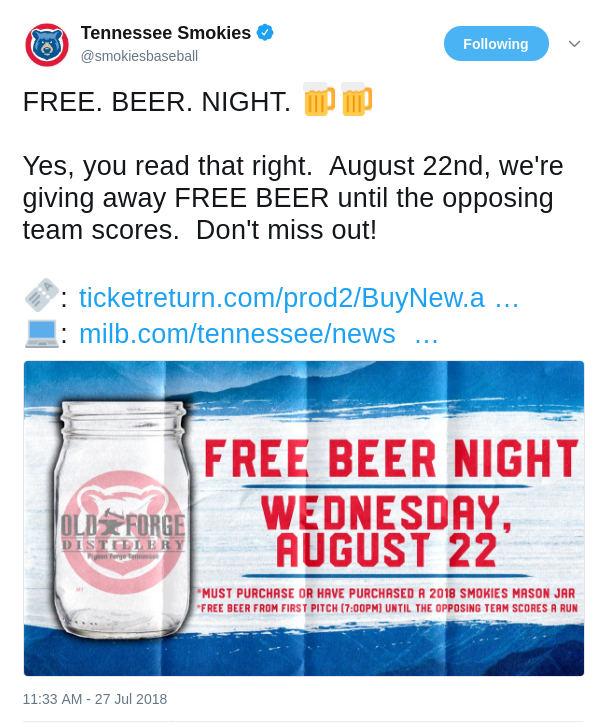 LOL.  Free as in beer is a common meme in reference to  software development like that  used to write this log book.  Note that it lasts only from first pitch until opposing team scores.  Don’t have enough data to run a matchup analysis on this but just looking at the team status fans better drink fast before this promotion ends after whoever they play scores.  🙂

The White Sox’ AA team has improved since last season.  Let’s have a look see as to their top valued players according to this data model.

Except for Jimenez who the Cubs traded last season for Jose Quintana, not sure who any of these players are.  Lots of high numbers in the rate column and lots of players in the top 100 and top 200 of this league.  This could be a very good sign for the future of the White Sox.  We’ll see if this improvement holds true in A+ and AAA class minor leagues in subsequent parts to this series.

Below is a table listing the top 25 valued players in AA according to this data model.  Again, ranking in minors is not like ranking in MLB because players move around a lot. A player who plays well at this level is not guaranteed to play well at the next level.  Dominance in a league shows capability for that class level of baseball.

Not sure who any of these players are either.  Pretty sure many of them are in a top  prospect list like this.

Houston has a pretty solid AA team to go with their pretty solid MLB team which won a World Series last season.  They have a decent shot at winning another one this year.  They must be doing something right in Houston. Below shows top AA players for HOU .

There are all kinds of ways to sort this list. The number of runs scored and runs scored against are related to a team’s wins and losses and reflect upon the value of talent playing throughout the entire season — not necessarily who is on their current roster.

In Part 2 of this series we’ll go down one level and look at the Cubs and White Sox A+ team and more name dumps. Until then ….