Recently some idiot tweeted this reply: 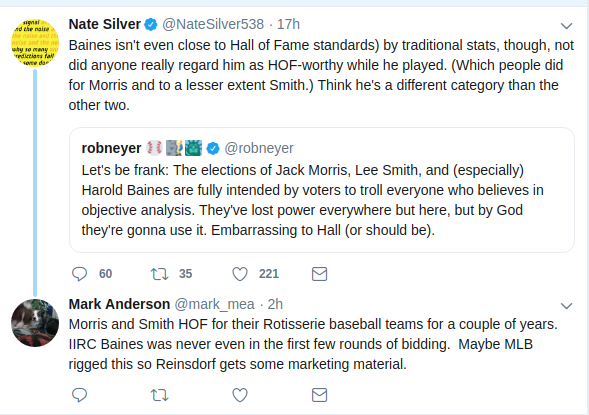 That idiot turned out to be me.  There is apparently a lot of controversy over this Harold Baines pick as well as Morris and Lee Smith.  Let’s break these three down according to this data model.  When I made the above tweet reply I hadn’t looked up any of these players in this model which was a mistake.

tl;dr Baines should be in, Smith a big maybe with caveats, and Morris should not.

Let’s start this diatribe off with a blurb from the Daily Herald.

Baines never drew more than 6.1 percent in five elections by the Baseball Writers’ Association of America, far from the 75 percent required. In the key WAR stat compiled by baseballreference.com, Baines’ lifetime total was tied for 545th.

The first error in the above is WAR does not have additive properties as has been proven here over and over again.  You can certainly add yearly WAR numbers together but the total has little meaning in most cases and most certainly should not be used for ranking purposes.   The WAA value according to this data model has proven additive properties.  This is how we simulate, seasonal rank both players and teams, and how we rank careers.

That said, Baines is ranked 545 in the WAR system.  According to the Google there are 222 MLB players in HOF.  WAR rank as described above would put Baines well out of that range.  One would think future HOF players need to break into the 200s to qualify.  Maybe that number becomes relaxed as years go by.  Perhaps top 250 would be fine for today.

As of the end of 2017, this model has the Baines career ranked #249 from the top, the top being Babe Ruth.  According to the compilation made by this model at the beginning of 2014 Baines was ranked 236 so 13 players exceeded his career number in 4 years.

Note added 12/11: Following the 2014 compilation link above leads to an html output of his career made at the time.  Back then this model ranked the top 300 and bottom 300, everyone else unranked.  Since then this model has moved to top 200 and bottom 200.  The ranking score in those tables was used to directly compare WAR results with WAA results.  The rank of a value system means more than the weighting number used to rank. </end of Note>

Edit for clarification: Since WAA has additive properties it can be calculated for each team a player played for.  The sum of a team’s player WAA should translate into their actual win/loss record.  If a player played for multiple teams in a season the script that makes the above show WAA for each team.  Added together for the year is used for ranking purposed (last column).

That’s 21 years in MLB.  Highlighted in blue are years he made top 100.  His career high was 1982.   I played Rotisserie baseball leagues in the late 80s.  Baines may have been a top tier player in bidding during those years, another mistake in my tweet.  He was a pretty consistent player and didn’t put up many negative years until the 2000s and had many positive years.

IMHO this is a border line case based upon rank and longevity.   Let’s look at Jack Morris.

Highlighted in blue are his top 100 appearances, in red his bottom 100 appearances.  Morris was an up and down pitcher and ended his career almost completely average.   He wouldn’t be ranked by this model and completely out of HOF consideration other than perhaps his longevity and personality.  His worst year was 1993 and best year 1987.

Update: Morris had 7 top 100 years.  If you can count all your best holes on the golf course then perhaps he should be in.  🙂

Relief pitching has always been, and still is, underrated by all baseball stats.  Fantasy baseball leagues use saves as one of their metrics for winning so closers tend to get most of the glory for what little glory relievers get.  Lee Smith was a closer and IIRC, he was highly valued in Rotisserie leagues because of his role racking up saves.

A player who helps a fantasy baseball team may not help as much on their real team.  Modern baseball stats cater to players who help the their fantasy teams.  Let’s look at Lee Smith’s career according to this data model.

According to this data model Lee Smith ranks #488 as of the end of 2017.  That isn’t high enough for HOF but maybe it’s high enough with respect to relief pitching.  He qualifies for longevity at 17 years but had many average unranked years.  HOF is for players who excel.

In the context of relief pitching Smith might be ranked high enough to qualify.  I don’t know.

Of these three picks described above, Harold Baines should be the least controversial.