The DH series requires historical event data to be compiled for 2018.  Since I have once again been lazy this off season I have been reluctant to revisit those scripts because 1) I may have forgotten how they work and 2) scripts always seem to break when sitting around for a year.

Historical scripts need to be rewritten.  The historical dataset is the foundation for simulation and required to prove or disprove their accuracy.   That’s why today I was pleasantly amused to find some distraction by this tweet.

What better way to get back into the baseball season than arguing over valuation systems and Rob delivers.  The first rule of the Prediction Racket is:

No one can predict the future

Unless you’re a time traveler from the future no one can possibly know what will happen.  Even time travelers can alter their future by affecting something in the past which is called the Butterfly Effect.  Second rule of the prediction racket:

Past results do not affect future results

If you roll a 6 three times in a row it doesn’t mean it’s more or less likely that you’ll roll a 6 again.  The probability is exactly the same no matter what happened in the past.  If a slot machine hasn’t paid out in a long time that doesn’t make it more likely to pay out no matter what compulsive gamblers want to believe.

Third rule in the Prediction Racket:

Use the past as a template for the future

The third rule is more of a how to for those interested in being part of the Prediction Racket.  The first step is take standings from last season and adjust up or down the teams.  If you’re wrong no one will remember.  If you’re right you make sure everyone knows.  Win Win.

Let’s look at standings from last season with a screenshot of baseball-reference.com before they update for this season. 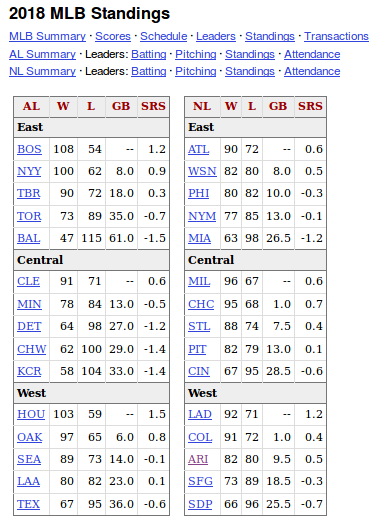 Now let’s look at a current screenshot of standings as reported by Baseball Prospectus using PECOTA.  A screenshot is used because this page probably will get updated and changed. 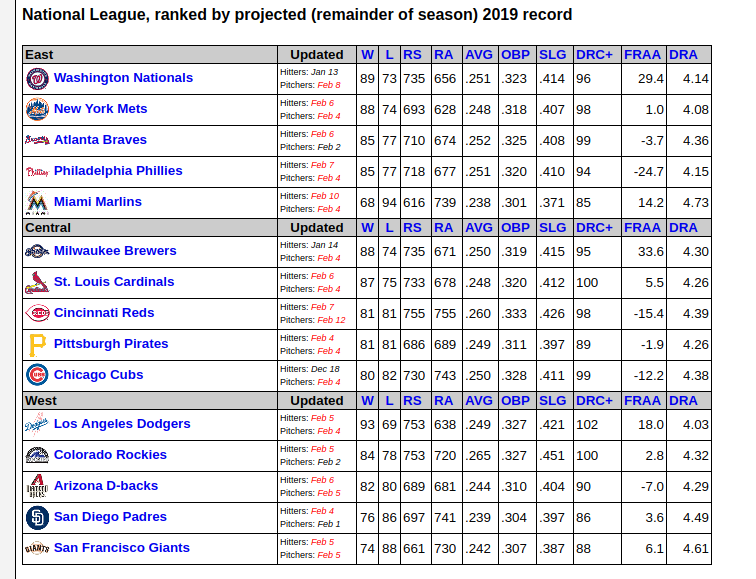 This model uses 3 year career splits to rank teams by strength.  Below is a truncated table of top 15 MLB teams created at the beginning of 2018 when we had complete 25 man rosters.

This table takes WAA career value for 2015, 2016, and 2017 and sorts by Total.  Total is the sum of Pitchers and Hitters.  Pitchers is the sum of Relief and Starters as we knew at the beginning of the 2018 season and posted here.   Since we’re from the future we know how this season turned out.  Colored in bold green are the NLDS contenders and bold blue the World Series contenders.

Eight of the top twelve ranked teams made it into the playoffs with only Atlanta and Oakland missing from the top half of MLB.  Atlanta was ranked 27 out of 30 teams and they ended up winning NL East.  OAK is literally the team Michael Lewis wrote about in Moneyball and ranked #18.  They are constantly cycling new players through their system.

The above only measures career so the potential of new players don’t get counted.  In 2015 both the Cubs and Astros were ranked at the bottom of this list.  Both had a lot of new guys.  The Cubs ended up in the NLCS that season and both teams rose to the top of the league with career players in subsequent years.

The above table will be reproduced for this season in April when we get a complete dataset of roster data.   Rules 1 and 2 of the Prediction Racket preclude making projections.  The above table demonstrates, however, a team with top career talent will most likely do well in the regular season.  A team that ends up in the bottom half of this list will probably not make the playoffs but as Rule 1 states, No one can predict the future.

That is all for now.  Subsequent parts to this series will be written if there are any funny tweets during Spring Training or in April when complete 25 man rosters are known and we can have some fun with PECOTA like we do with WAR.  Also, Part 2 of the DH series will be forthcoming.

Since the minor league database has been updated we’ll take a look at the new guys on the Cubs in Spring Training as well as the White Sox.  The White Sox are ranked 6th in AL according to the Vegas book as to who is going win the ALCS.  PECOTA isn’t so favorable according to this: 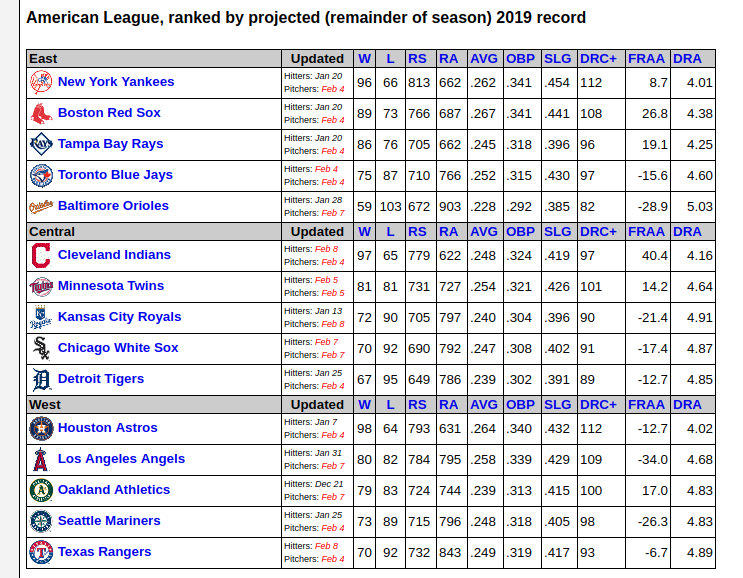