First two games of spring training for 2019 are in the history book.  Let’s go through a box score and take a look at the new guys on CHN using our newly updated minor league DB. Subsequent parts will highlight new guys that will rotate in throughout the month.

This post will be a lot of search tables into minor leagues.  Only AAA, AA, and A+ are catalogued.  First, here’s a screenshot taken from Reddit in r/ChiCubs.  What game this is doesn’t really matter.  Explanation as to how to read these tables below the fold. 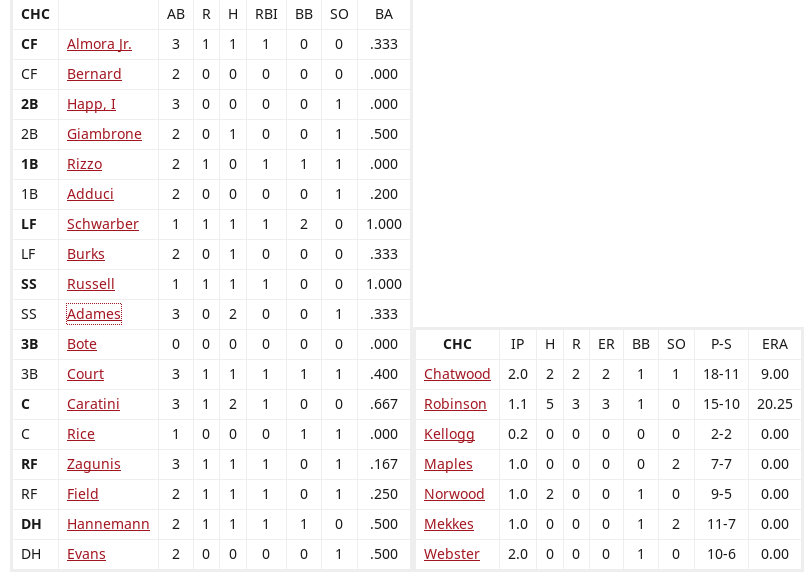 The order of new guy tables is determined by their order of appearance in the above box score starting with BATters and then PITCHers.

The above table format for a minor league career search is a work in progress.  This is a Keep It Simple Stupid (KISS) data model so only rank and WAA, the value  factor used to rank that represents W-L and is the foundation of this data model, are important  A WAA=0 is completely average.  Negative means below average, positive above average.  As of now we don’t pull in position data for minor leagues other than PITCH or BAT.

Like MLB, the dataset used to calculate WAA is all players for all 30 franchises.   For example, AAA has two leagues, International (int) and Pacific Coast League (pcl) which are combined into one dataset.   Pitchers and batters are ranked together, the sum of WAA for each adds to 0 exactly — like how real team W-L records add to exactly zero.  For every win counted a team must lose.  Not too complicated!

In the above table a rank of XXXXX means neither top or bottom 200 in that league for that year.  Since players move from league to league in minors playing time is cut short so WAA cannot accumulate as much as players playing a full season in that league.  Thus, rank is not as important as it is in MLB.  The Win% column puts the WAA calculated weighting factor in perspective.  See how it’s calculated here.  Win% are not shown for MLB records as it would be deceptive.

The last column is age which is an important factor in player development.   The above shows Bernard hasn’t been a very good hitter in minors and at age 27 probably won’t make it.  Decent MLB players usually dominate when they were in minor leagues but sometimes there are exceptions.  The above table shows Bernard is a below average minor league player except for 2016 in AA for the DET franchise (Detroit Tigers).

Trent has been on our radar for two years now and bats almost completely average.

Note: This model only measures past results.   There could be fundamentals that scouts and player development coaches see in these players that could make them decent MLB players one day.

At age 34 now Jim can be considered a professional minor league-er and based upon his 2018 numbers he could be a good hitting first baseman helping the Iowa Cubs win more than they lose this season.

Ryan is getting kind of old to be in the minors but he had a good season last year.

Phillip played well last year for the Mets affiliate in AAA.  It looks like he came up twice to MLB in September call up season and hit below average.

Now we get to PITCHers.  Those are some pretty decent numbers.  A 0.688 Win% shows he dominated A+ in 2017.  He might have spent part of that year in A.  This model does not track A league.

Slightly above average in 2018 in A+ league.

He pitched 11 innings for the MLB Cubs last season and had very good numbers in AA and AAA leagues.

Those are dominating numbers in all three leagues.  Dominating minor leagues does not guarantee dominating MLB but it does improve the odds.  Since he played AAA last year Cubs could bring him up mid season to help win a World Series.  You can never have enough pitchers.

Subsequent parts to this series will show any new guys I happen upon in box scores throughout spring training not mentioned above.   Those parts won’t be as long as this initial post.  Not much more to say.  There will be no spring training team statuses or any player rankings until perhaps the end of spring training.  Then in the regular season we have to wait until 1/6 of the season has been played to show player rankings.

Still working on 2014 – 2018 season simulations where we go mano a mano between this data model, fivethirtyeight’s ELO model, and Vegas betting lines.  Who is most accurate?  Since we’re from the future we know the outcomes for all these estimated probabilities.  More on that when I get around to it.  Until then ….