We did a playoff horse race post nine days ago.  I usually wait two weeks in between these  because team roster value and real team WAA moves at a glacial pace during a season.  Recently I stumbled upon a fivethirtyeight.com version of a playoff horse race table and thought it would be fun to see how it fares with this data model and, of course,  WAR.

Below is a screenshot of the ELO playoff horse race table taken 8/12/2019.  Because this ELO table changes daily a mere link will bring you current results not the table we’re comparing against. 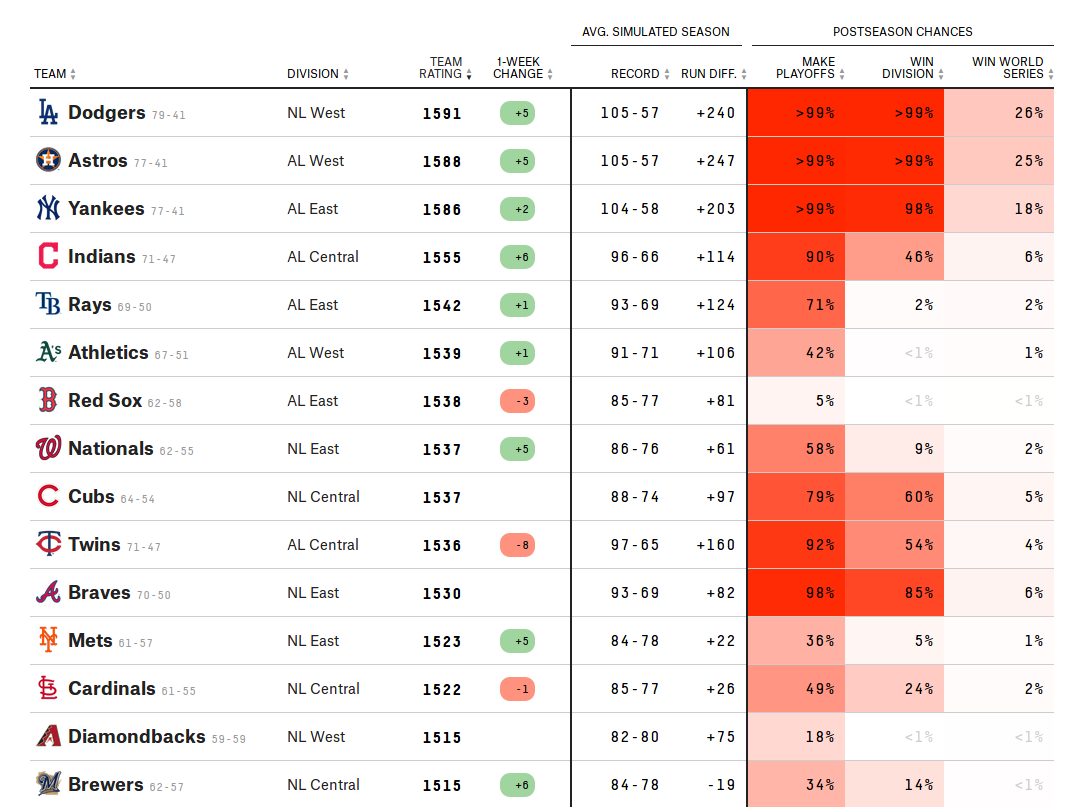 OK.  Not sure what any of those numbers mean.  The above shows the top 15 teams according to Nate Silver’s ELO model.  They provide some kind of probability numbers making it a 70% chance that Dodgers, Astros or Yankees win a World Series.  Since HOU and NYA will battle each other in order to play in a WS, Nate’s model must think either HOU or NYA will easily beat LAN according to conditional probability (which I did roughly in my head).  This doesn’t make sense since they rate Dodgers best team in MLB right now.  Oops.

The above table lists top 15 teams based upon real team wins minus losses (WAA) sorted by Total WAA according to this data model.  Teams in bold brown are division leaders, bold green are wild card leaders.  Hitters, Starters, and Relief are added together to make Total.

UR is in units of runs and represents Unearned runs above or below league average.  This provides some indication of team fielding.  UR is not a factor in Total WAA.  For some reason Dodgers have the worst UR of these 15 teams which could be an Achilles heal for them during playoff season.

Bold blue are leaders in each column, bold red are worst of the top 15 teams.  This was colored manually so there could be mistakes.

This model agrees with ELO making HOU, NYA, and LAN top three in value.  ELO has Atlanta ranked #11, below the Cubs.   This model has them ranked #5.  ELO has Minnesota ranked lower as well.

Both WAA and WAR tables below rely on current rosters.  I heard through the grapevine that Yankees have been suffering from many injuries.  Guys on IL don’t get counted in these tables whereas ELO may count the entire team.  I don’t know.  If NYA gets to full strength that might propel them into a virtual tie with HOU and LAN according to this data model.

Let’s see what WAR has to say about all of this.

Update 8/13/2019:   I accidentally pulled from the wrong dataset so the table posted yesterday used old WAR data.  The above WAR table is updated to use data from today (8/13/2019).   Since baseball moves at a glacial pace the below analysis is still valid even though the numbers are different.  LAN is still middle of the pack even though ELO and WAA ranked them top tier.  According to WAR LAN is tied with NYN for the worst relief staff which is absurd.  Here is their team status:

PITCH is derived off runs scored against and the above is #1 in MLB.  LAN is by far #1 in MLB with respect to pitching based on the only stat that determines who wins a baseball game — runs.  TBA is second with a PITCH of +103 and WAR has them underrated as well.

NYA and LAN valued very low according to WAR.   Red Sox  rank #2, valued significantly higher than Yankees.  This might be due to injuries.  WAR only has one team in top tier, HOU and they are very far ahead of second place.  The rest of the field is tightly bunched.

According to WAR Atlanta is just ahead of Cubs which aligns more with ELO than this data model.  Unfortunately for HOU, the MLB Commissioner makes teams play each other instead of relying on any of these data models to determine who gets the WS trophy.

That’s all for now.  Cubs play PHI tomorrow so another matchup post to see what the Phillies and Bryce Harper have been up to.  Until then …