It has been around 10 days since Part 7 of this playoff horse race series so let’s again take a look at how the three different models; ELO, WAR, and this model ranks the current top MLB teams. 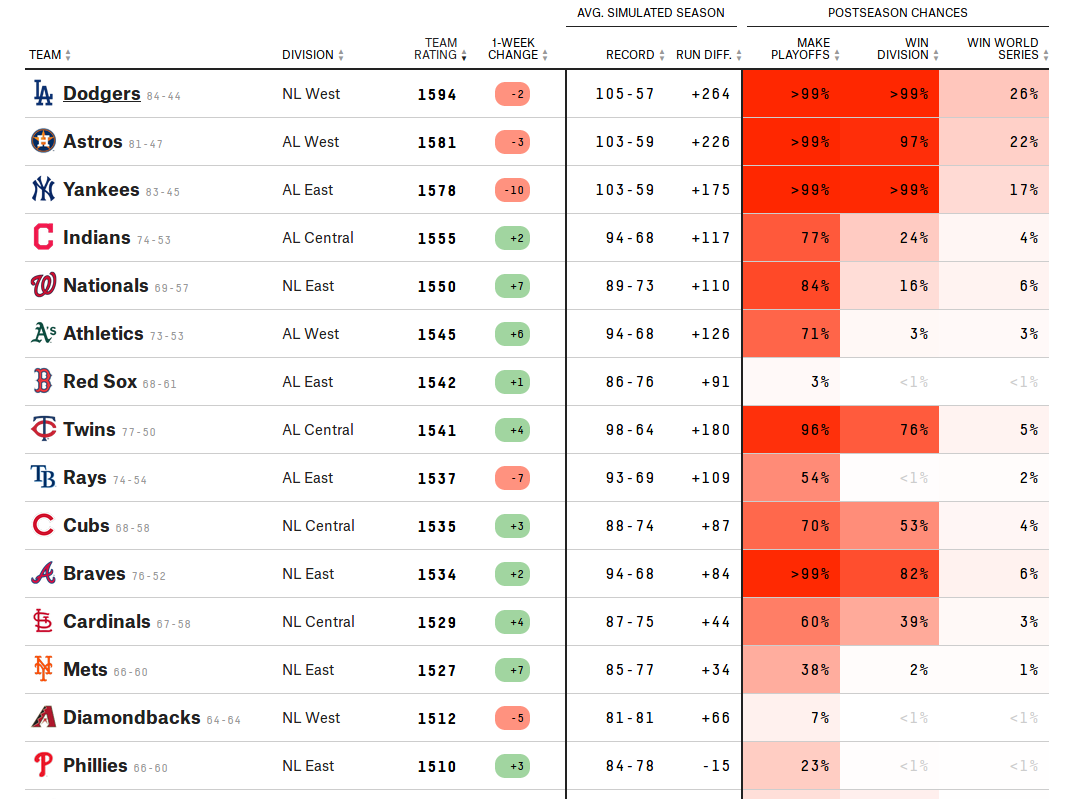 The above is a snapshot taken today (8/22) of ELO rankings.  Let’s look at the rankings generated by this model.

Bold brown above are division leaders, bold green wild card leaders.   Bold blue category leaders, bold red category worst of top 15 teams.  Relief, Starter, and Hitter value added together to make Total in units of wins.  UR is unearned runs above average in units of runs and included to provide some indication of team fielding.  Amazingly three of the top 5 teams have given way more unearned runs than average.

This model has the Twins and Braves ranked much higher than ELO has them.  Cubs are bottom mid tier in ELO as well as WAA and both models have Cardinals ranked lower.  Atlanta is ranked top mid tier well above CHN.  ELO has Atlanta ranked worse than CHN.  Those two teams are currently slated to meet in NLDS if everything above stays the same.

Washington has weak relief. Yankees and Boston have weak starting pitching.  Cardinals have the best set of relievers right now but WAR may not agree.  Let’s see what WAR has to say…

The separation of HOU with second place is 13 WAR.  From 2nd to 13th cover the next 13 WAR so tiers are kind of bunched together below HOU.  This disagrees with both WAA and ELO models.

WAR has Dodger relief negative which is quite remarkable since WAR rarely goes negative.  Let’s drill down into LAN relief and compare WAA and WAR.  Unfortunately we don’t have access to ELO’s individual evaluations.

Looks like Joe Kelly and Caleb Ferguson are in  WAR’s dog house.  All the rest of LAN’s staff are meh according to WAR.  Let’s see what this model thinks of this relief squad.

This isn’t a stellar relief staff one would expect with the best PITCH in MLB but it’s  capable and certainly not worst of the top 15 MLB teams.  Casay Sadler ranked top 200 and could make top 100 by end of season.   WAR in general under values relief which sometimes puts relievers in the muddy middle where they don’t get credit for contributing to their team winning.

The next part of this series will come out 9/1 using the last roster in August.  September call ups expand rosters and can distort these rankings so we might do one mid September and then wait for the real playoff rosters starting with divisional series.