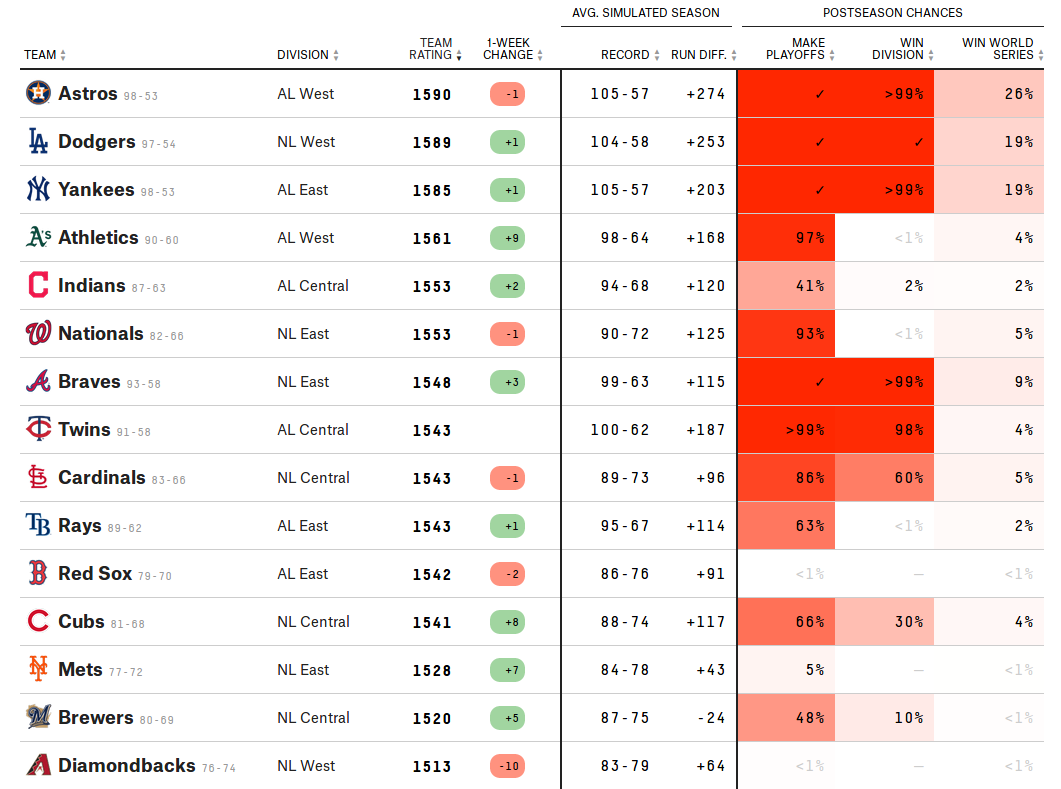 The above is a screenshot taken today (9/16) of 538’s ELO model.  Don’t know how ELO is compiled or what a “Team Rating” number represents.  ELO has OAK and CLE now in top 5 with WAS bumped down to mid tier.  Since ELO does not break its numbers out like we do below there isn’t much to comment on.

The above lists top 15 teams according to real team WAA (W-L) and then sorted on Total WAA according to this data model.  The numbers above are based on current rosters.  Since we’re in expanded roster month there may be some distortions up or down that may not represent  an actual 25 player playoff roster.  This model only counts stuff from current rosters and cannot discern who is there because of expansion.  The WAR table below is counted the same way.

WAA and WAR below has Cubs mid third; ELO has them low third.  All three models now have HOU and LAN top two and all relegate ATL to middle of the pack.  Cubs are on a sugar high with hitting because of their last three games with PIT where they put up double digit runs each game.  This propelled them ahead of SLN even though Cardinals are ahead in the only stat that matters in baseball.   Pitching has boosted SLN into first place in NL Central.

Unearned Runs above average (UR) has runs as units.  All other columns are WAA values  with wins as units.   LAN still has the worst UR but it’s up from past parts to this series.

WAR has HOU way above 2nd place LAN in Total, so much so it could be its own tier.  These WAR and WAA tables are based on current rosters with values simply added together in each category.  HOU has best starting rotation in WAR, WAA has LAN with the best.  BOS has the best set of relievers according to WAR, WAA has SLN as the best.

Let’s spot check these numbers on where WAR and WAA differ most.  Both systems agree HOU has top notch pitching close enough to be tied for first.  WAR has LAN starting rotation mid tier.   In past parts to this series WAR has been shown to under value LAN pitching; both relief and starters.  Let’s look at starters.

Dodgers list 7 pitchers as starters which is a lot.   HOU follows closely in second for starter value and they only list 4 which is a typical playoff starting rotation.  Dodgers have 4 starters in top 100 which phenomenal.  Houston has three starters in the top ten which is even better according to this data model.

According to rank, WAR sees far less value in LAN starters than WAA.  How can that be when LAN still ranks far ahead of MLB in PITCH according to seasonal runs scored against.

These are the top 5 MLB teams according to PITCH which is a seasonal value.  There is no way Dodgers starters can be rated so low according to WAR having such high seasonal  PITCH.   Although current rosters can deviate from seasonal numbers, that’s not the case here.  All 5 of these teams should have top tier pitching ( relief + starters ) and they do according to WAA.  WAR has LAN ranked in bottom third of playoff teams with respect to total pitching which is absurd.

WAR under values relief as well.   Both BOS and SLN have major differences with WAR.

Tiers are calculated based upon the top 8 relievers.  Cardinals will have a very good relief staff going into the playoffs according to this data model. At Tier +3.24 SLN is over 1.5 standard deviation above league average for relief.

WAR only has one SLN reliever barely ranked in top 200.  One would think this is merely a so so relief staff just looking at the above numbers.

According to this model BOS relief, at Tier 0.99, are about 1/2 standard deviation above league average but well below the Cardinals’ +3.24 tier number.  Let’s see what WAR says.

SLN relief had a total WAR=5.2 which is far less that the above 9.6.  WAR thinks BOS Relief >> SLN Relief.  This model has an opposite view where SLN >> BOS.  Which model is correct?

The next playoff horse race will be posted when the 8 teams in NLDS and ALDS release their 25 player rosters.  The two wild card games will be handicapped individually and there will be some historical playoff handicapping leading up to the actual playoffs.  Final Cubs status for regular season coming in a few days.  Until then ….