Cubs lost to Marlins in the 2003 NLCS after they were 5 outs away from winning their first NL pennant since 1945.  Since the Marlins ended up winning that World Series, 2003 could have been *the* year but tragedy struck once again.  Let’s look at this series with focus on the Cubs.  A report like this will be available for any team any post season soon.

Below is the trajectory of Cubs’ status through the 6 month regular season in 2003.

Cubs had a +4 April and flat lined until September where they had an incredible +10 month to win the NL Central.  Pitch kept getting better while BAT got worse making them even steven most of the year.  Here is where they were in NL Central September 1, 2003

In third place but still very much in contention for first.  Most years these records would not win a division.  Here were the top Cubs that season.

Seven out of top ten are pitchers as one would expect based upon their seasonal BAT and PITCH numbers in team status.  Let’s look at the horse race table which sorts all 8 playoff teams by WAA value according to this data model.  The W-L column is their real team WAA, the only stat in baseball that matters.

Both Marlins and Cubs bottom of the pack.  The momentum from Cubs streaking in September allowed them to overcome a much better Atlanta team in NLDS.  Atlanta had relatively poor starters and terrible fielding while Cubs had the worst set of hitters of the 8 teams.  This was compensated by the best set of starters along with the worst set of relievers and the worst overall real team WAA of +14.

Relief about equal between these two teams which remains constant throughout the series. Lineups are also about equal in mediocrity.  A Tier of 0 is exactly league average based upon end of August lineups using end of season data.  This makes starting pitching the only category that differentiates these two teams in each game.  Zambrano is one tier better than Beckett so CHN would be favored this game.  The simulator for post season is not yet completed to provide an estimated probability.

This game should have been a pitching duel yet both starters tanked with the Marlins getting a W making 1-0.

Cubs win Game 2 with Prior and they would be heavily favored this game. 1-1.

Cubs win game 3 in Florida with Kerry Wood on the mound.

Marlins would be favored this game but the Cubs win it putting them up 3-1 with a trip to the World Series almost assured since Marlins have to win the next 3.   As we saw in 1984, nothing is over until it’s over.

Cubs bats fall flat and can’t finish the Marlins off so it’s off to Chicago.

The infamous Bartman game.  With Prior on the mound Cubs would have been heavily favored in this game.  It wasn’t Barman’s fault Cubs gave up 8 runs that inning.

Kerry Wood had an off game even though Cubs scored 6 runs which is a lot for a playoff game it wasn’t enough.  Cubs players were emotionally exhausted from Game 6 and that was that.

The highlighted walk plus a wild pitch given up to Luis Castillo was when the Bartman incident occurred.  The error two plays later was an easy double play that should have ended the inning. The official scorekeeper assigned the last 5 of the 8 runs scored in that inning as unearned. Unearned runs however count the same as earned runs when determining who wins a baseball game. 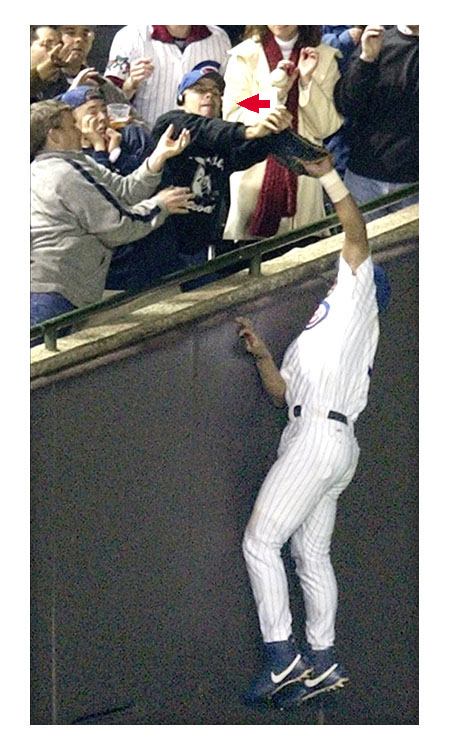 …the events that followed clearly show it was Cubs players who let up those 8 runs (5 unearned)  that followed this incident, not Bartman   Prior looked shaken as well as the rest of the team.  This model shows Cubs relief was mediocre at best so was it wise to leave Prior in so late in the game with the crowd in turmoil?  Who knows and hindsight doesn’t matter anyway.

The above picture was widely circulated on the Internet the next day after this game, October 15,2003.  It could have been Photoshopped but there were several different versions all showing the same locations of Bartman and Alou.

That is all for another episode in playoff history according to this data model.  The browsable web site will allow for click through on all playoff data but without commentary.  Minor league wrap up for both Cubs and White Sox coming soon.  Until then ….